“50 Bags for Plastic Island” is a project that consists of fifty cloth grocery bags that will replace disposable plastic or paper grocery bags. Each bag is photographed and numbered. Each person who buys one is encouraged to submit a photo of their used bag after one year of use. I’m interested in the way these photographs might highlight the effect of a full year of wear, in contrast to the short-lived use of a single plastic bag.

Plastic Island is not a real place. In my imagination, it seemed like a swirling mass of plastic bottles, fishing line and Styrofoam coolers clinging together in the middle of the Pacific Ocean, only the tip of the iceberg reaching above the surface. In fact, there is no actual island, just a swirling gyre of plastic particles, most are smaller than a BB shot, and not just one gyre but five around the world. The plastic particles are more accurately compared to smog, except its in the ocean.

The bags are $30 each and come with a short story about my encounters with plastic bags and ten facts about plastic pollution in the ocean. 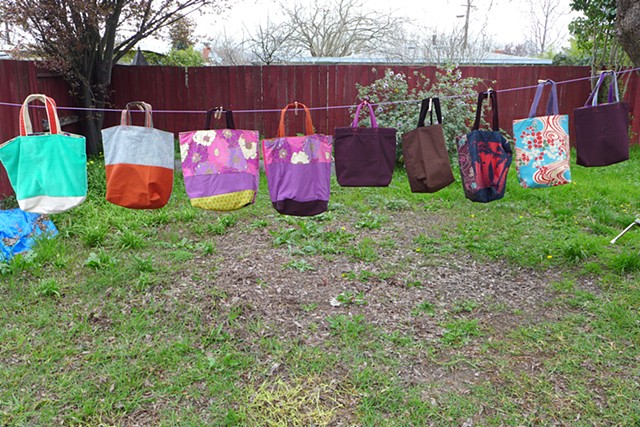